March 10, 2017
A NOTE ABOUT GLUE: If you read some of my earlier posts regarding my mock-up test hull, you'll know that I often used Titebond II to glue things instead of epoxy. That was because that boat was never going to see water. This time I am almost exclusively using epoxy. This is the real deal boat and will be sailed, so a waterproof adhesive is required. Specifically I'm using WEST System 105/205. Read more about it here.

I started to laminate the fin tonight. Just the inner core made from 1/8" plywood, and then the first side of ply #2 made out of 1/16" plywood. You need to take extra caution on the first three or four ply's so that it remains really flat. The last few ply's you can stop using the 3/4" MDF form, but use it for the first several. 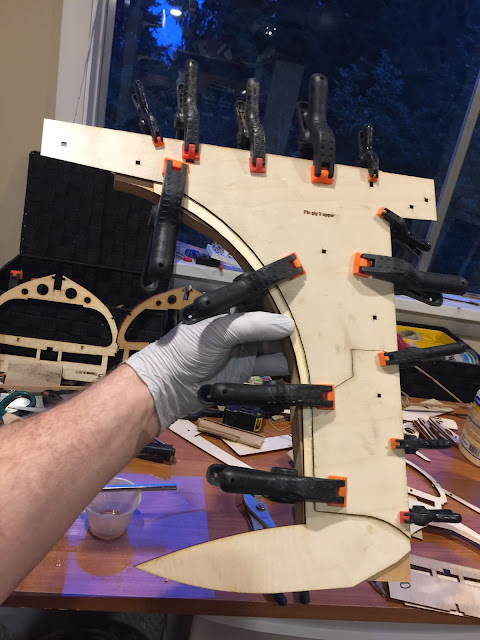 Use the excess epoxy: Then use the extra epoxy to clear coat some of the frames. Between laminating the fin and rudder, you can easily also add a thin clear coat to all the frames. I spread on a coat of epoxy on both sides of the frames, being careful to not clog up any slots or such that will need to be cleared later. And then I take a paper towel and wipe off most of the epoxy. This leaves a very thin coating.

When dry it will have a rough surface which you can very lightly sand, but don't sand too much or you'll remove the waterproof barrier of the epoxy. The next day, if you have more excess epoxy, you could give them another very light coat and wipe that off too. When dry the surface should be much smoother. I only sand the frames that might ever be touched, but the frame very far forward that will never be seen again, I leave completely unsanded. Racers won't do a second coat due to fear of adding too much weight. I don't care that much about weight... except that I myself could lose a few pounds, but I like wine too much...

When finished with clear coating the frames, be sure to SAND the outside edges where the planking will go. Epoxy doesn't stick well to cured epoxy, so you must sand it to get down to the wood. This is also a good idea if you've used the laser cut frames because the cutting leaves melted glue resin from the plywood that should be sanded off regardless. So... sand the edges! 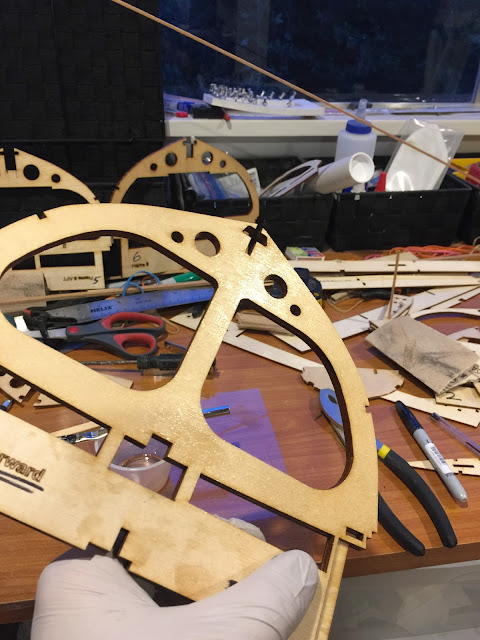 I'll be laminating the fin and rudder, and clear coating the frames, for the next few days. After that I can then start on the building board and putting up the frames. Got a long way to go until she's sailing...