March 25, 2017
In my previous boats, I've always used an aluminum mast (and a carbon fiber one on the Tippecanoe T37). For this Vintage Marblehead High Flyer Sun Wind II though, in keeping with the tradition of the 1940's/1950's, I thought it would be fun to attempt a wooden mast. This is my first try!

People on the innertubes seem to agree that spruce is the best. So I went to my local lumber yard (NOT a big box place either... but one that knows wood better), and bought two sticks of what they said was spruce. However, once I started milling it, I'm now not totally sure what I bought. I think that it probably is spruce, but after reading online about the differences, it may actually be pine.

Even if it is pine, at least one smart guy online says that he prefers it for his mast anyway. So... whatever! I'm calling it spruce. It has some very small knots in it, and is very whitish. The pine I've used in the past has been a bit more yellow.

I milled out 8' strips that were 1.5" wide and 1/8" thick. Then I laminated four of those strips together onto an 8' aluminum angle stock. Beforehand, I had put down a strip of clear packaging tape on both inner surfaces of the aluminum. Then I mixed up some slightly thickened epoxy and spread it on with a soft squeegee.

Then I clamped the hell out of it, and wiped up as much of the squeeze out as I could. Looks reasonably straight right now. 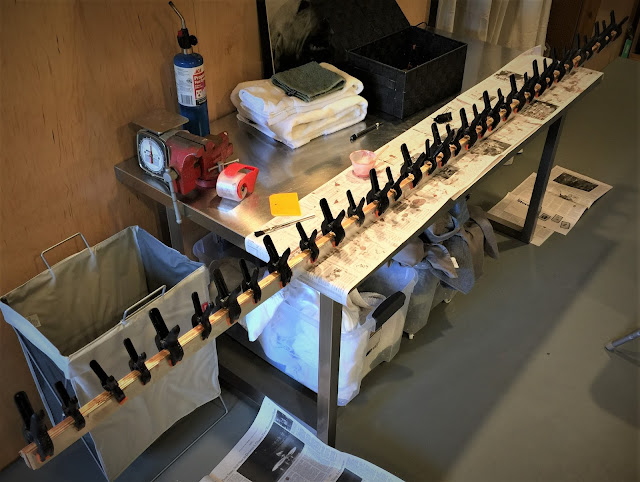 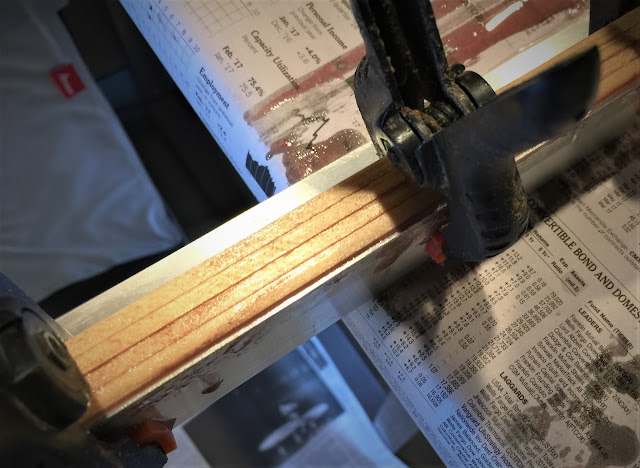 Tomorrow, I will unclamp it, clean it up, and then attempt to mill it down to its final dimensions of 1/2" thick, and 3/4" fore and aft. Fingers crossed that it will all work!