February 25, 2019
I've been working on a number of different things on my Corbie 5 IOM this past week. This post is on how I aligned and fixed the fin and bulb to each other. 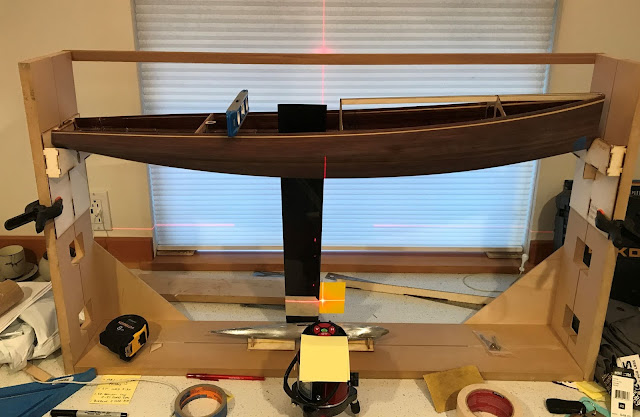 I spent a lot of time lining everything up as best I could. The Corbie 5 manual says to have the front of the fin at 493mm from the stern, the fin raked so that the base is 6mm aft of the top, and for the center of balance of the bulb to be 10mm aft of the leading edge of the base of the fin.

I then worked on the bulb. It weighed well over 2500g when it arrived, and I had to remove a lot of weight. First I had to hog out the channel so that the fin would fit. 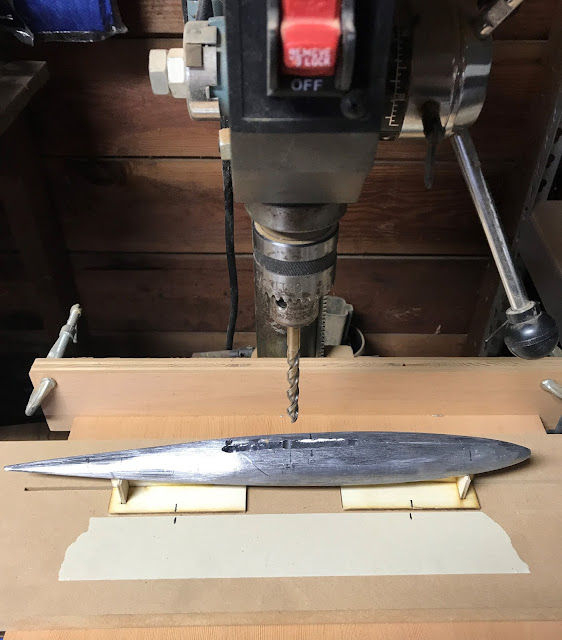 I used my drill press to hog out much of it, and then my Dremel tool to remove the rest.

I also drilled out the mounting holes. This bulb came with a large brass insert that had a 1/2" base and a 5/16" sleeve. I had to use two different bits to get the holes to work, but it wasn't that hard. I was fortunate that this bulb doesn't have a brass rod running through the middle. According to Radio Sailing Shop, "HC1 - IOM Bulb - Latest round section bulb in the Bantock/Pikanto/Fraktal style - Cast in CNC mould for accuracy. These bulbs are now made from a lead and antimony alloy which makes them stiffer without the need of a brass rod reinforcement." It was pretty easy to drill out and shape.

It was still very heavy so I drilled a number of holes both fore and aft, but mostly aft, to move the center of gravity forward a bit. They were later filled with thickened epoxy mixed with lightweight silica thickener.

However, I screwed up and think that I now made my bulb too light. The rules say that the fin and bulb must be no more than 2500g together. Right now they are just over 2400. I'll be adding some epoxy and then paint, but that won't get them up to 2500. Oh well... it's my first IOM. Besides, we are notorious for light winds around the Seattle area, so maybe this is good.... ?

Next I drilled out the fin for the attachment bolts. The fin included bolts and circular mounting/retaining nut that is drilled through the side of the fin. I went slowly, marked everything exactly, and fortunately lined it all up perfectly on the first go. And I did it without running the bit out the side of the fin! Phew!

Then, when it all worked well, all mounted together perfectly (I remarked the new center of balance on the bulb too), and when I was mentally ready.... I taped the fin, plugged the hole in the bulb, mounted it all back in the hull, lined it all back up exactly, and then... gulp... poured resin into the channel in the bulb.

After a few hours I added some thickened epoxy to top it off, and then let it cure overnight.

The next morning, after a small amount of gentle "persuasion", the bulb snapped off. Phew!

After some cleaning up on the stationary sander, this is what I now have... 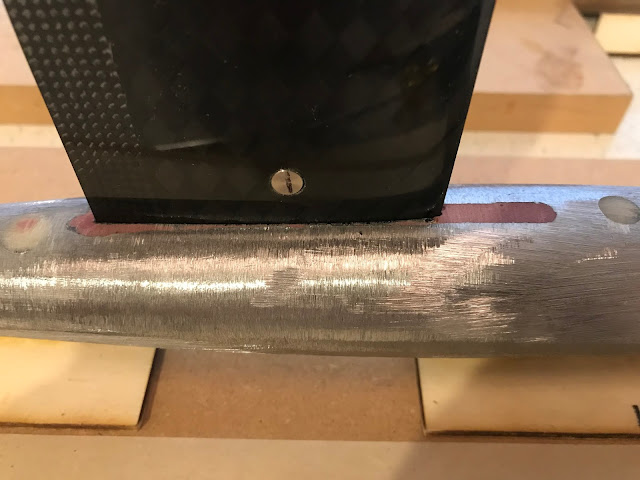 That's one big hurdle! Still need to epoxy coat it and level it out perfectly, and then epoxy paint it.

Next post... the custom fin box that I'm making.