June 21, 2017
Last winter I designed a crazy looking, laser cut mainsail boom for my Sun Wind II RC sailboat. The idea was to add a bit of high-techy, artsy, far-outness to an updated 1949 design... and in the process make a boom that was both lightweight and strong.

It's made of 8 layers of 1/32" plywood cut on the laser cutter and then epoxy laminated together.

Here are the laminations after being cut out. 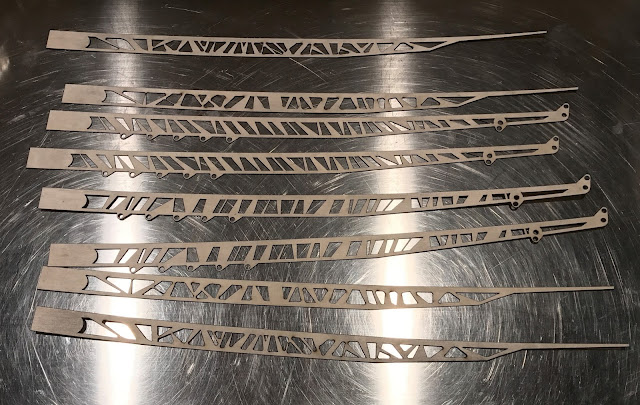 Then I put some tape down on a piece of MDF so that the epoxy wouldn't stick. After that, I drilled three holes and put sticks in them to hold the pieces in alignment. 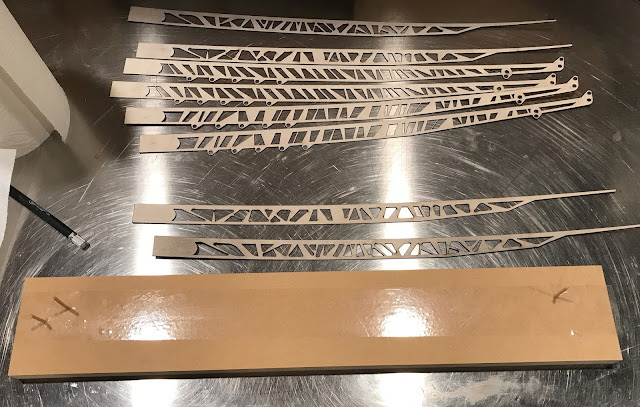 Then I mixed up some epoxy and brushed it onto all the inside surfaces. Before putting them onto the MDF though, I gently wiped them down with a paper towel to remove most of the excess. When I did a similar technique for the swing arm, I noticed that I had a lot of excess and that it looked bad. Hopefully I've avoided most of that issue on the boom. The amount of epoxy that remained on the laminations should be more than enough to adhere them.

UPDATE: I made a second boom. Frankly, this is a test idea. I still haven't even ordered the sails yet from Rod Carr, so I may have to make a third one. I modified the original one and removed the five dropdown eyebolt tabs, rescaled it, and other things. This is the final version. My wife hates it and thinks that it's too "modern" and "high techy" for a vintage era boat like this one. I'm not so sure.. it might work. But, if I mount the sails and it looks stooooopid, then I'll simply make another one that is just a traditional stick. Boring...

I'm also working on a funky weird jib boom. More on that later.