February 15, 2017
Starting now on the glue up of my initial run of laser cut frames for my Sun Wind II RC sailboat.

A NOTE about glue: At this point, I've now found enough tweaks, changes and improvements that I can do that it truly will be a "mock up" with no chance of ever becoming a working RC sailboat. So in that case, I'm just mostly using Titebond II to glue the bits instead of epoxy. However, I will refer to using epoxy for those who might not realize that this is a mock-up. For my actual build later on, I will use epoxy almost exclusively.

I started by making some 3/4" MDF bases for my rudder and fin glue-ups. The MDF is very flat and will provide an easy way to clamp the parts. This way, when I do the real boat, I can reuse the same bases. Just roughly trace around your fin and rudder parts onto the MDF and cut it out. Be sure to mark where the small 1/8" squares are, and then later drill out a much larger hole. I used a 1/2" hole. The idea is that you will use 1/8" stock to align all the pieces by sticking the stock through the holes in the parts. The excess will stick out the backside and through the large holes. The large holes just give you a little room to spare. 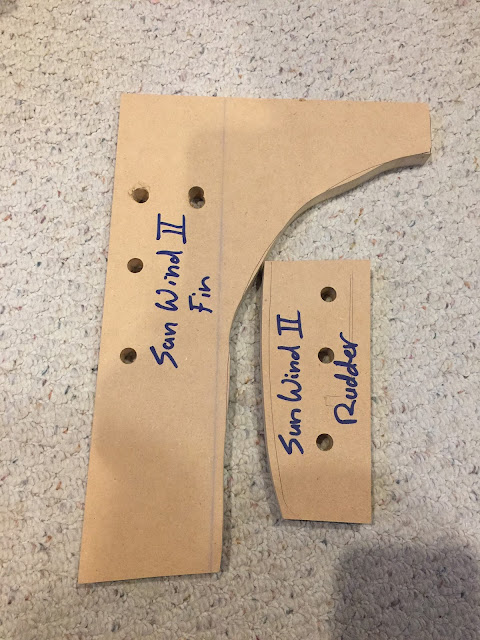 Then you can start to laminate the parts. Have some mylar sheets, or some copier transparencies, or even a cut up garbage bag. Epoxy doesn't stick to plastic well and you will use this as a way to make sure that the parts don't get adhered to the clamping base.

Have some short sticks of your 1/8" square stock ready to go, and make sure that they fit the square holes in the parts. Then spread some epoxy on the parts and set the next layer on top. Stick the 1/8" stock through at least two of the holes to perfectly align them, and then clamp down. Wipe up any squeeze-out. Remove the sticks once the clamp-up is secured or else they'll be glued in. That's OK for the last layers (in fact it's recommended), but you'll need at least two of those holes cleared for the additional layers later on. 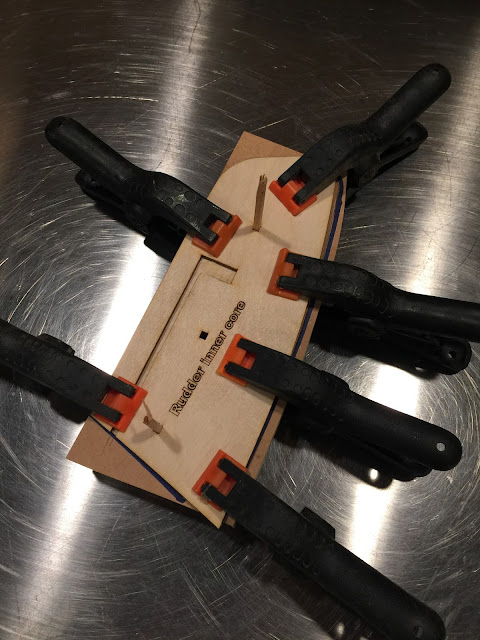 Only do two layers at one time, at least for the first two layers. This will ensure that they are flat and very stiff when cured. At that point you can then glue as many remaining layers as you can handle, and you probably won't even need the clamping base at that point as the initial lamination can usually keep the parts flat enough.