November 06, 2017
I'm in the process of thinking, yes... just thinking, about making my own ballast for both the Sun Wind Hf and for the upcoming Wampum III, both Vintage Marblehead sailboats, but using two different styles of lead ballast.

The Sun Wind HF takes a torpedo style bulb. I 3D modeled one in Sketchup Pro 2017, and from there exported an STL file that I used in one of our 3D printers at school (I'm a teacher and the CTE teacher actually printed it for me). Here is what we ended up with... two identical male molds: 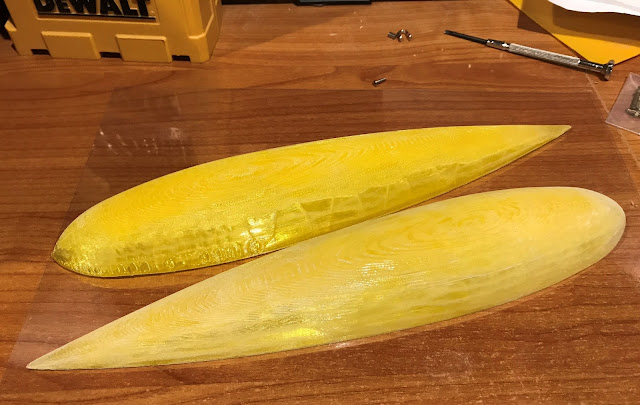 Here is what the bottom of one of them looks like: 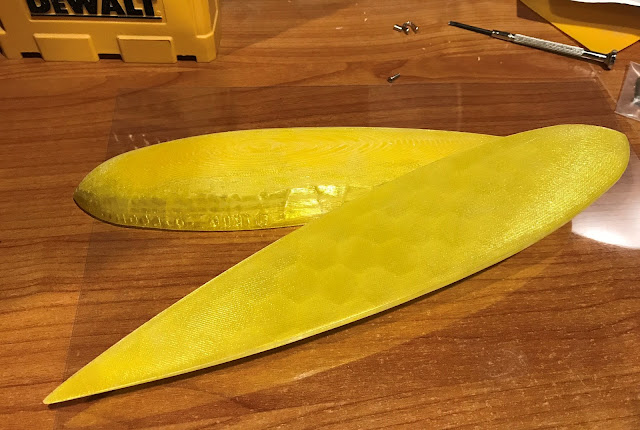 3D prints are a bit rough, and if I used them straight they might stick to the cement too well. So I'm coating them with thickened epoxy and will then sand them down. I'll then wax them before using them.

The idea is that I will sink these into a container of refractory cement and let it harden, will remove the molds, and then let it cure for a long time (weeks). The concrete will probably also take a turn in a low oven for several hours at some point.

Then I'll attempt to pour the lead. Should work fine... fingers crossed!

As designed, they should create a bulb that weighs just over 9 lbs. That would be just over 4.5 lbs each half. Then they would then be cleaned up and attached to either side of the fin inner core as I did on the new Sun Wind HF Vintage Marblehead sailboat. Its bulb was 11 lbs and a bit too heavy for this design. I think that 9 lbs would be better suited.

I'll do the same thing with the Wampum ballast, but it will take some time to make the male molds for it. They can't easily be 3D printed, and will instead need to be made from laminated plywood layers and then shaped and filled in with thickened epoxy, and then shaped again. Will update later when I make those.