January 29, 2017
Tonight I modeled the Hitec HS-815BB Sail Control Servo for use in both the Rip Tide and the Sun Wind II RC sailboats.

I'm going with a sail arm servo instead of a drum winch like I used on my Star 45 and Salish 475. I really want the deck to look clean, without any sort of shock cording like I have on the drum winch boats. Yes, I can use an internal self-tensioner, but a swing arm is also much easier to use.

It may not be as competitive, but on the other hand, a lot of guys swear by them and say that they are just as fast as the drums. Since I'm not into racing, I don't care and will go for simplicity. Besides, this servo is $50 compared to $300 for the RMG SmartWinch. RMG winches, by the way, are amazing! I suggest you use them on certain boats. But for the VM Rip Tide and Sun Wind II, I'm going with simple and clean.

Here's how the 3D servo looks. I wanted to make sure that it would fit, and that the arm had plenty of room to swing. Looks good so far! 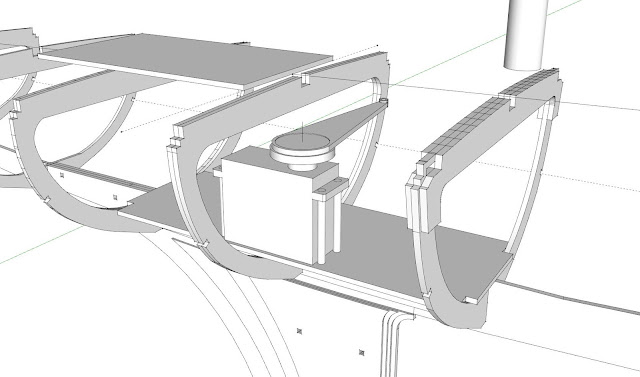 Tomorrow I'll start on the regular sized servo (Hitec HS322HD) for the rudder, and then work on placing them on the board. I'll also have to work on how best to support the two different-sized servos, plus find places for the battery, receiver, and wires. Hmm... big challenge! But, the gentleman who makes the most amazing pond boats, has a picture posted that will give me some guidance.