January 21, 2020
At some point I would very much like to model a vintage America's Cup yacht. The one I've been most interested in lately in the 1964 winner Constellation.

But this past week I was sent a 1/16 scale drawing of the 1934 Rainbow. It's a beautiful drawing! Full sized so it's very large.

I have been working on making it into a 3D model, but as is true with most hand-drawing lines, none of the lines from one view match up with the lines from the other views. For example, I spent a lot of time tracing the "sections" view so I could make stations. But when I tried to match them up with the plan/deck view or the waterplanes view, none of the lines met. Some came close, but all had to be adjusted.

Then, once they are matched to the deck and keel lines, it's obvious that the hull is not fair. I honestly doubt that the hull would be fair if you simply used the station lines as originally drawn either. Back when they made these boats, they put it on the actual builders to fair the hulls, and if the "table of offsets" was off a bit then so what...

This points out how accurate designing in 3D really is. When you start a hull design in 3D it easily matches up the station contours and everything matches.

Here's how it looks now... if you look closely you can see an uneven keel line and areas where the hull clearly isn't faired.

The green lines are my adjusted lines that mostly meet the deck and keel lines. You can see that some are close to the original but some are way off. 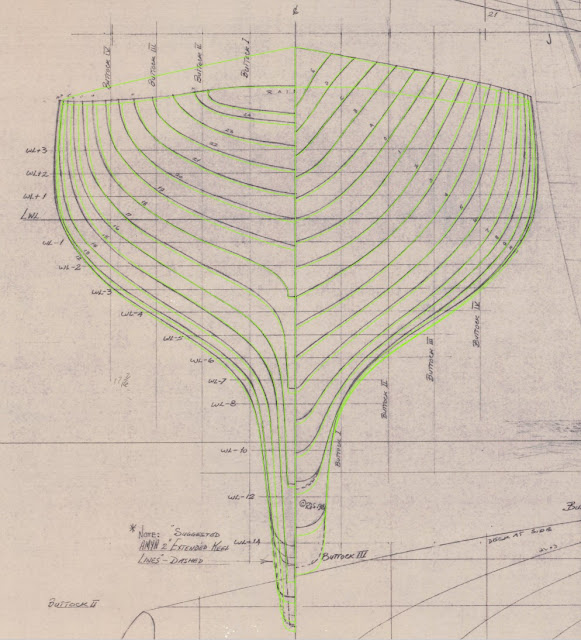 Look closely at the bow area and you can see some out of fair lines...

Here you can sort of see a bulge in the bow area as well as that un-fair keel line. 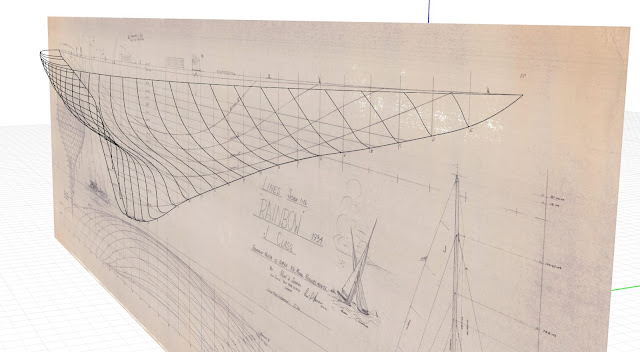 Anyway, it's a beautiful boat and if I ever get a chance to make one I'll have to spend a lot more time making it fair.