December 09, 2018
Still haven't received my rudder or fin from Radio Sailing Shop, but have added a few more additions to my 3D model.

In the rendering below, the greenish wood colored parts are the temporary frames. They look funny toward the deck because only the hull portions are showing. The lighter colored, yellowish wood bits are permanent. 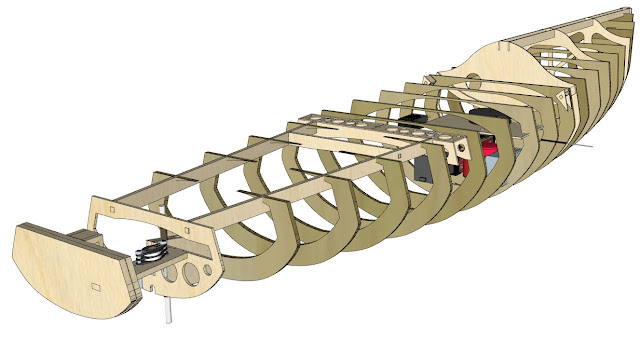 The rudder alignment piece looks large and heavy, but it's neither. In fact, depending on which rudder you use, you may be able to cut this down significantly and only use the aft end of it. What is shown is for rudders that need to be placed from 60mm to 85mm from the transom. If you're using a rudder that needs less than 85mm, just cut the forward portion off.

Here's how the aft deck looks so far, but won't be able to finalize it until after I figure out what I'm going to do with the fin and mast box.

Here's how the electronics fit so far. Will certainly have to move them around though. However, I do not plan on using one of those ugly plastic pots that many IOM sailors use today to keep some of their electronics dry.

My hull will be pretty dry, but I'm also using electronics that can handle a small amount of wetness. The receiver for example is waterproof. The rudder servo is waterproof. The LiPo battery is wrapped and should be OK. In fact, the RC hydroplane guys don't worry about their LiPo's at all and they get theirs completely soaked.

The RMG winch will be a bit of a risk, but I sooooo don't want a pot that I'm willing to take the risk.

Here are just the electronics. I downloaded from the Sketchup Pro 3D Warehouse the receiver and rudder servo that someone else had uploaded. I also used the plugs from someone else for my battery but modeled my own battery. The RMG 285 SmartWinch I modeled myself but only roughly just to show the space needed. I didn't model the gears and such.. just the space taken up and the mounting plate. It works well enough for my 3D modeling needs! 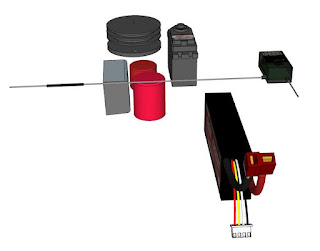 So these are what will stay in the boat. Hopefully it won't add toooooo much weight.