November 23, 2018
According to many, the Corbie 5 IOM of Mirage Radio Yachts in Tasmania is currently one of the most competitive boat designs available to the home builder who wishes to build a wooden IOM. The other wood IOM design is the "Alternative" IOM from Brad Gibson Sails and Design in the UK. I've purchased the plans for the Alternative but haven't received them yet.

Since drawing up laser cut frames for the Laerke IOM, I've started looking toward building an IOM that might actually be competitive with a more modern design. It was suggested to me by Bob Wells, a Seattle IOM guy with loads of knowledge about IOM's, that I contact Jeff Byerley in Tasmania and Ian Dundas in Scotland about getting the plans for the Corbie 5 IOM. Those two have worked together to create the Corbie 5 and to make it available to home builders.

I contacted them, bought the plans, and got the plans and a well-written construction manual. They also agreed to send me the DXF file of the stations so that I could make laser cut forms and a building jig. Thanks Jeff and Ian!

Below are pictures of what I've come up with so far for the Corbie 5 forms and alignment jig: 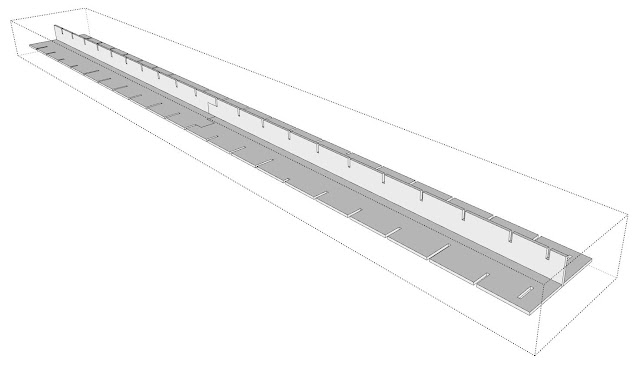 Each station was brought in 1.8mm from the outer edge to allow for planking. Each station has a step on which to perfectly align the first sheer rail. There are openings with small rectangles over which you can run rubber bands (elastics) to hold planks in place.

The stations even have a small 2mm diameter hole to shoot a laser through for those who have access to a laser pointer to double-check alignment.

The jig perfectly places each station, and each station can only fit a very specific slot. There are two braces that help support both the stem and stern forms as they are quite fragile.

I'm not sure if I'll ever make a Corbie 5, but if I do I now have the plans and laser cut forms to do so!


IF INTERESTED IN MAKING A CORBIE 5, OR IN GETTING THESE LASER CUT FORMS:

I have made an agreement with Jeff and Ian that I will never share this laser cutting file for the Corbie 5 IOM. If interested in making a Corbie 5 IOM, please contact Jeff or Ian and ask about building one.

They are currently charging $115 AUD (approx. $87 USD as of Nov. 2018) for the plans and manual. The plans come with station forms that you can copy and glue to wood to make yourself. For an additional charge they also have a company in the UK that will laser cut just the outlines of the forms for you, but they don't include the step for the sheer plank or the building jig. You'll have to carefully align all 21 forms on a board yourself.


The "laser cut stations" referenced above only cuts a basic station shape that you then have to carefully align on a board after making detailed lines. My version perfectly aligns the forms for you, and the step on the forms eliminates the need for extremely careful marking and aligning of the sheer rail.

If interested in getting the laser cut forms that I've made using Jeff's exact station outlines, then also contact Jeff or Ian and ask for the laser cut forms and building jig that I've made. They can decide what to do for you. As of Nov. 2018 they haven't decided what to do with my file. Perhaps at some point they might make it available through their selected laser cutting company in the UK, or perhaps they may make it available through National Balsa in the US, or maybe they'll just send you the file and let you cut your own or find your own laser cutting company?

My only request if you end up using my file is that you send pictures of your build that I can post here on my blog! Thanks!

Good luck on your build!